Dead Moon — Epilogue — the second part of the album Dead Moon of the Spanish artist Luis Royo. There are mainly sketches and sketches, but there are also several full-fledged pictures. 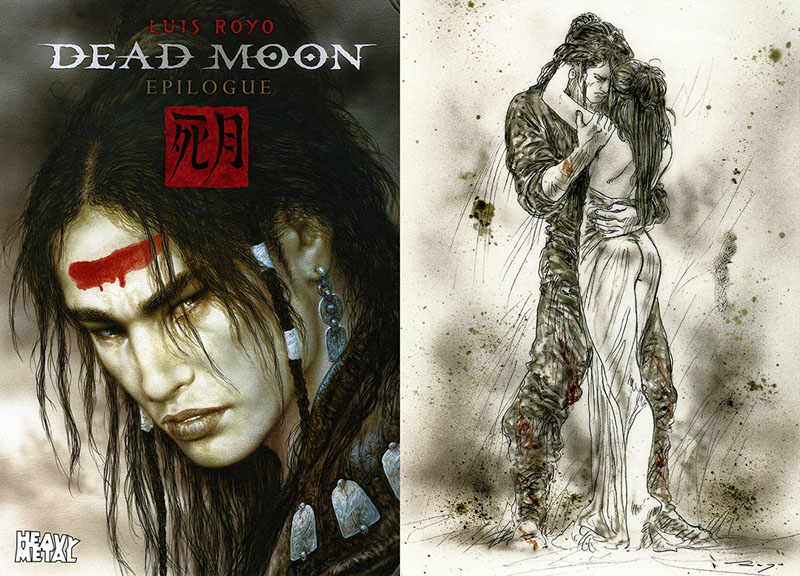 Luis Royo revisits the world of the Dead Moon with Epilogue. His ambitious story puts a science-fiction spin on the story of Romeo & Juliet, casting it not in terms of a war between families, but rather as a war between genders. This ambitious epilogue focuses on the origins of the characters, Moon and Mars, and their tortured and passionate relationship, leading to a trail of death left in their wake.

Luis Royo (born 1954) is a Spanish artist born in Olalla, a village in the Aragonese province of Teruel. He is best known for his fantasy illustrations published in numerous art books, magazines such as Heavy Metal and various other media including book and music CD covers, video games and Tarot cards.

Beginning his career as a furniture designer, he was attracted to the comics industry in the late 1970s by the work of artists like Enki Bilal and Moebius. In 1979 he turned to art as a full-time career. Within a few years, he was publishing art within and on the covers of such magazines as Comix Rambla Internacional, El Vibora, Heavy Metal, National Lampoon and Comic Art as well as providing cover illustrations for several American publishers.

Here you can see only part of the art book for your reference, but you can download it in full size and excellent quality